What if we SLOW DOWN? 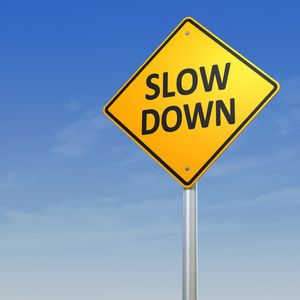 The greatest pieces of art we have globally come to know, love, and respect all share a common thread.  Think about the Great Pyramids of Giza.  The Sistine Chapel.  The Sagrada Familia.  The wonders of the ancient and modern worlds.  Great pieces of literature and famous paintings.  The great cityscapes of the world.  Any lasting piece of art you can think of; they all share one critical piece of commonality.

Great art requires great lengths of devotion.  Great devotion doesn’t happen overnight.  None of those masterpieces were created by happenstance in a small moment.  There is no “I guess I got lucky”.  These masterpieces were crafted by artists who had an innate ability to capture inspiration then channel it into a methodical and purposeful process. And in many cases, these artists spent their lifetimes devoted to creating a small handful of pieces.

Man, what a great chasm between those masterpieces and much of what we see and consume out there in the world today, specifically in music.  From beginning to end, it is a rush.  From the 3 hour co-write window, to “how fast will you have my mixes back?”.  “I want to get this up on iTunes ASAP”.  The entire recording process is constructed on the ideas of speed and efficiency.  Every part of the creation process is slave to a single idea: how fast can we get it done?

I want to take a moment of your overly busy day and explore what I believe we are unknowingly forfeiting by being in such a rush.  I don’t necessarily have answers to propose, but I want to get us thinking and considering what slowing down COULD mean for us creatives and ideators.

When was the last time it was okay to try something and fail?  Do we “try” stuff anymore?  Do we have time to “tinker”?  Do we go back and re-write, re-vise, and re-think?  Do we audition more than one idea?  When was the last time you trashed the entire chorus and started over?  Are we just attempting to land on the first thing that works and keep moving?  Most of us, if we are being honest, are looking for the first thing that “works”. And we confuse “it works” with “it’s done”.

I love to hear stories of great modern masterpieces that took extreme measures of persistence and devotion to birth.  Edison failed to create a “successful” lightbulb over 1,000 times. Most of what he called “failures” still emitted light.  Ford’s first “successful” car was the Model T, because models A through S had failed, but surely A-S started up and could be driven.

This is the tenacity it takes to create a masterpiece.  When was the last time we went through so many ideas we discovered our “Model T”?  Or are we just so used to the feeling of riding in a Model C car that we’ve forgotten what “T” would be like?  I’m afraid that if we don’t slow down, no more great lightbulb ideas exist because we stop working at the first sign of light in the bulb.  Light in the bulb is NOT the point of success.

Specifically in songwriting, I hear stories of a song like In Christ Alone, where the writers penned many more verses than were necessary.  They did this to be able to choose the strongest collection of verses in the end.  I think they succeeded.

Look at the richness of hymn lyrics.  Verse upon verse upon verse of amazingly beautiful lyrics.  My money says, those lyrics weren’t forged in three hour co-writes, they were life-songs.

Compare that to our co-writes where we are often struggling to get a verse 2, let alone verse 3, 4, or 5.

Is a masterpiece really just a matter of being willing to stay in the creative fires longer?  Is it a matter of wrestling with the ideas longer?  I’m starting to think “yes”.

The model of burning through the creation process to arrive at a final product as fast as possible is broken.  I’d venture a guess that Michelangelo's goal wasn’t to simply paint a ceiling, but rather, create an inspiring piece of art... which took 4 years of his life.  Would he have made different creative decisions day-in and day-out if he was working simply just to get to the end goal as quickly as possible?  Absolutely.  Man, if we are honest, we’ve barely spent more than a few days on any project in our creative lives.  Imagine 4 years... I literally can’t.  Sorry goal oriented people, but working towards something just to reach the end is not sufficient.  Creativity has no definitive end goal and no timeline, it is simply an approach.

What if our approach shifted?  What if the end goal was not to simply “write a song”, no matter how noble the cause?  What if our goal was always to “leave our legacy”?  That puts a different weight on things for me.  The little things that bug me in the verse, I can no longer let slide.  I have to keep digging until it feels “right”.  It forces me to fight and push back with my co-writers until the “ifs”, “ands” and “buts” all mean exactly what we hope to convey.  What if we allowed creativity to outweigh our deadlines?  How would that impact our final product?  If you ask me, it would revolutionize everything about it.

I laugh to imagine the response to a text where I say, “Hey, let’s get together for one week, and work on writing just one really solid song”.

Maybe it’s because I’m a dad now of two baby girls, but the idea of legacy has really been rattling around in my head quite often.  And in this context of slowing down, maybe it’s time we operate from the frame of mind of being people of legacy.

But what if we thought about the future?  What if we considered what our children, grandchildren and future generations will be singing.  We have a chance to influence and impact their songs directly and indirectly with what we do here and now.  The question is, will we slow down to do that with intentionality?

I think about the impact the Psalms have made on the world.  Bible scholars will certainly laugh at my brief internet search, but I read that the book took “many centuries” to write in its entirety.  That’s leaving a legacy.  And that legacy permeates our culture and song lyrics every week in our churches still today.  There’s no way David and the other credited writers of the Psalms were out to “write a hit we can use on Sunday” to try and gain leverage in their day and time.  They were documenting their interactions with God for the people coming after them.  The legacy they left is still inspiring and alive today.

A legacy mindset will help us all avoid chasing trends and “worship hit” pitfalls.  It will hopefully help us to chronicle our lives in a meaningful way so that future generations can see the love and faithfulness of God that He displayed to us in our lifetimes.

This blog is for me as much as it is for anyone else (as they all generally are). I’m still very much in process, but I’m starting to realize the power in SLOW.  Slow is so contradictory to the nature of our fast paced world.  Everyone’s schedule is nuts, I get it.  But I’m starting to see that great art doesn’t allow for anything to be rushed.

Maybe we’ve been approaching it incorrectly and are rarely reaching our Model T ideas.  Maybe the end goal should be more about content than a deadline.  Maybe considering our legacy will give us the inspiration to say something worth saying.  Maybe there is something to be learned in the art that has withstood generation after generation.

Wouldn't it be nice to just breathe every once and a while?  Now how do we do that? I suppose that’s what we each must discover.